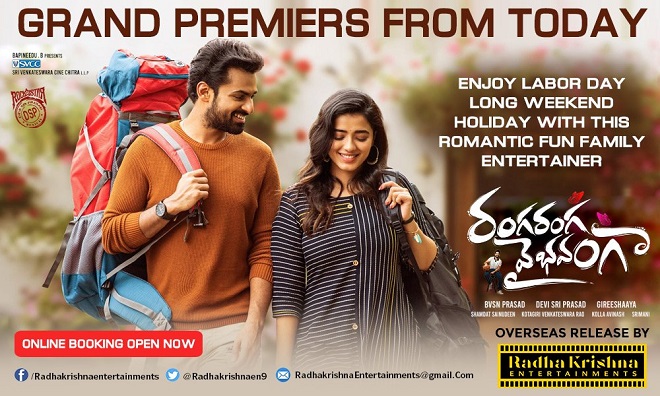 
After scoring a super hit with his debut film 'Uppena', Vaisshnav Tej proved his taste by selecting an offbeat script like 'Kondapolam'. He has now arrived with a youthful family entertainer titled 'Ranga Ranga Vaibhavanga'. Directed by Gireeshaaya, this movie has attracted the movie lovers with its addictive songs and impressive trailer. Ketika Sharma is the heroine and Mega fans are expecting this movie to be successful. Let us how the movie turned out.

Rishi (Vaisshnav Tej) and Radha (Ketika Sharma) are good friends since childhood. They live in side-by-side houses and develop a linking for each other. But they fight with each other in school once and decide not to talk with each other. After pulling each other's leg everyday for over ten years, Radha and Rishi talk to each at one point. They express their feeling towards each other and right when they are about to get together, their families get into a dispute and start hating each other. What does Rishi and Radha do to reunite their families and make their love successful forms the rest of the story.

In 'Ranga Ranga Vaibhavanga', the families of the hero and heroine have a huge fight and stop talking to each other. Hero and heroine decide to reunite them and start focusing on their fathers first. They text each other with their parents' phones and realize that is them talking. With nothing left to do, they go to 'Yamagola' movie and they see their fathers cheering in front of the screen for 'Olammi Tikka Reginda' song. They feel happy and shift their focus towards their mothers. They throw the sarees of their respective mothers on the opposite terrace hoping that they would talk. But it doesn't work out and they bring 'Doctor Babu' from 'Karthika Deepam' into the scene. The parents get excited and get realization with the actor giving a small speech. Hero and heroine are very happy with it. One fails to understand how these kinds of scenes came out of the editing room.

Hero and heroine staying side by side with each other since childhood and they parents being best friends is a concept which is used right from 'Nuvve Kavali' and 'Nuvvu Leka Nenu Lenu' days. These movies give you a fresh feeling even today but there is not even a single point where 'Ranga Ranga Vaibhavanga' feels fresh. It gives you an outdated feeling and appears routine from the beginning to end. It tests the patience of the audience. The concept of hero and heroine not talking to each other due to an ego clash came to use for editing a good trailer but the entire movie needs to be based on a lot of drama and romance which went missing.

Gireeshaaya who made 'Arjun Reddy' Tamil version has faltered in the writing department itself for this film. He failed to create any magic and tried the run the movie with routine sequences. The physical romance looked good onscreen but the required 'Romance' is not felt between those characters. They both looked great but the chemistry between them lacked severely. The movie gives you a routine feeling right from the childhood episodes and does not excite you at any part throughout the film. The conflict point near the end of the first half makes you a bit invested but the movie is completely bogged down by a lethargic second half. The thread of the lead pair devising rotten ideas to bring their families together is so disappointing to watch on the big screens. The graph of the movie falls down constantly and does not go out at any point.

Vaisshnav Tej tried to play an active and energetic role this time. But his moody facial expressions did not suit for this character. His body language did not gel well but he tried to give a sincere performance. Ketika Sharma looked very good on the screen and was glamorous too but her acting needs a lot of improvement. Naveen Chandra is okay in a crucial character while the rest of the actors like Prabhu, Naresh, Pragathi, Tulasi, Nagababu and others are adequate.

Devi Sri Prasad tried to brighten up the mood constantly with his music. 'Kothaga Ledenti' and 'Telusa Telusa' are well composed and well picturised. His background scores are decent but there are no proper scenes for him to showcase his calibre. The visuals are colorful and everyone looked good on the screen. The production values are quite good and the editing work is decent too. The main problem lies in the script of this film which seems to be a rehashed version of many movies. The writing is quite weak and there are no high points in this film. The routineness and predictability surely disappoints the audience.