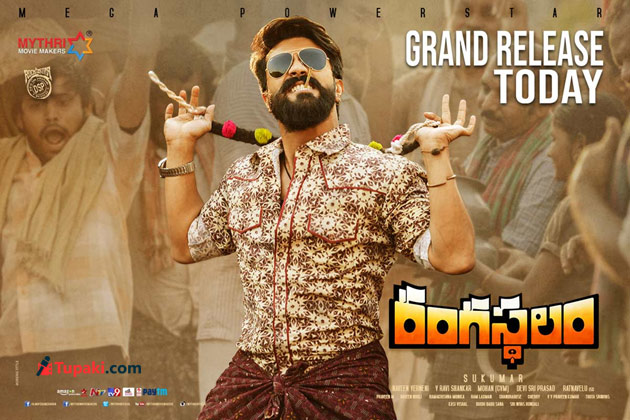 Not a surprise, 'Rangasthalam' is one of the most-awaited films of 2018. Thanks to Ram Charan's Makeover, Sukumar's Capabilities, Village Backdrop, Cast & Crew! There are huge expectations on this biggie which released Today. Let's see, How far it's gonna please the movie lovers...

Chitti Babu (Ram Charan) is a young lad with hearing-impairment in Rangasthalam village. He is in love with village beauty Rama Lakshmi (Samantha). Phanindra Bhupati (Jagapathi Babu) is the president of the village and he is getting elected unopposed since decades. Dubai-returned Kumar Babu (Aadi Pinisetty) decides to contest President Election to end the atrocities of Bhupati. The consequences of this gutsy move forms rest of the tale.

Undoubtedly, 'Rangasthalam' is a milestone in Ram Charan's career. This film would be an eye-opener for all those who kept raising doubts on the acting capabilities of Cherry in the past decade or so. He is a revelation in this movie & arrests the attention of viewers till the very end with his terrific performance. Be it his look or body language or dialogue delivery or expression, He is impressive in every aspect. Certainly, Chitti Babu will remain with the movie buffs for a long time.

Samantha is so natural as a village belle. You could only see Rama Lakshmi on the screen. Aadi Pinisetty got into the skin of the character effortlessly. Jagapathi Babu appears menacing but he looked artificial in few scenes. Anasuya is very impressive as Rangamma Atta. Naresh, Rohini, Ajay Ghosh, Brahmaji & Others have performed exceptionally well.

Lag in Second Half

Technicians stood as an asset to 'Rangasthalam'. A film of such a standards can be made only when all the departments work in tandem. Songs composed by Devi Sri Prasad & their picturization is marvelous. Background Score takes us back to the 80s. Rathnavelu created the required mood for the story & his brilliance is quite evident in every frame. Special Mention for the Art Department. The whole set makes the viewers believe the film was shot in a real village in the 80s. Production Values are splendid & there is no question of compromise. Sukumar choose an out & out village drama for the first time in his career. Though there is no freshness in the story, Characterizations & the way he narrated the subject makes the difference. 'Rangasthalam' could have gone to the next level had if the Second Half was crisp.

Films of Sukumar had mostly appealed to a certain section of audience because of the subjects he chose all these years. The concepts he picked up and his mark narration were way above the standards of the people in C Centres. This is why his projects hasn't received a wider reach so far. 'Rangasthalam' is going to change the kind of impression mass audience have on Sukumar. This time, Mr.Perfectionist came up with a village backdrop subject set in the 80s & tried to reach out to the masses with pure emotions.

Performances of the Cast, Village Atmosphere, Brilliant Output by Technicians and Arresting Human Emotions are the assets of 'Rangasthalam'. It's a rustic village drama directed by an Intelligent Director with praise worthy characterizations. Sukumar used the inability of Chitti Babu to hear very effectively. The activities of Charan as 'Sound Engineer' stood as a strength in the First Half. Good amount of humour has been generated utilizing the defect of Protagonist. Ram Charan is so adorable as Chitti Babu & he surprises with the tremendous growth in his acting abilities throughout the move. He owned the character so much that it stays with the people even after stepping out of the theatres. Combination scenes of Lead Pair are so endearing.

Most of the First Half was utilized for establishment of the Characters. Story takes a crucial turn in the Interval Block & generates tremendous curiosity on the second half. Whereas, The latter half wasn't up to the expectations due to drop in the tempo. Sukumar failed in effectively establishing how Hero & his Brother won the faith of people in the village after deciding to contest president election. The graph of Jagapathi Babu's role drops in the Second Half. Overdose of melodrama at times, slow pace & lengthy run time works against the movie.

Film shifts to highly emotional mode in the Pre-Climax. A surprise element has been included in the Climax but it's not something people can't guess. Ram Charan elevated the climax, if not the whole movie, with his brilliant performance. People talk about Charan first whenever the discussion is about this movie...Such is the impact created by Mega Powerstar. Overall, 'Rangasthalam' have all the elements to hit the bull's eye.