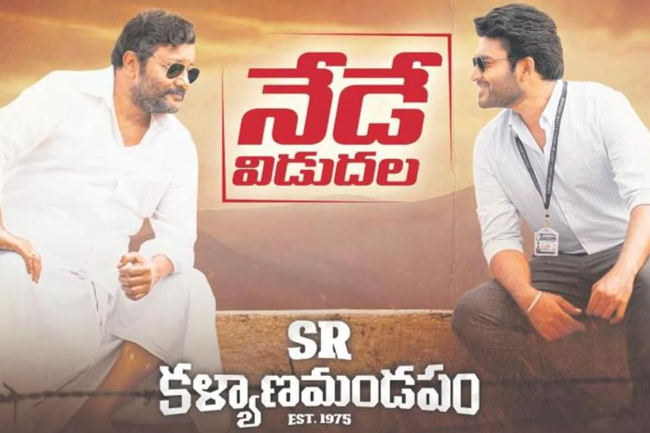 'Rajavaaru Raanivaaru' fame Kiran Abbavaram has arrived in theatres this Friday with his latest offering 'SR Kalyanamandapam'. The film was completed long back but the repeated lockdowns forced the makers to postpone the release. The trailers and songs attracted the youth and Priyanka Jawalkar is the heroine in this flick. Let us dive into the review to find out if this movie is as good as the trailer or not.

Kalyan (Kiran Abbavaram) is a happy-go-lucky college student who spends time with his group of friends. He loves Sindhu (Priyanka Jawalkar) for the past three years but she doesn't reciprocate the same feelings towards him. Alongside his love track, he wants to bring the glory back to his grandfather's 'SR Kalyanamandapam' which was completely ruined under his father's (Saikuamr) management. He and his friends work together for getting the business back on track and what challenges he faces and how he wins his love at the end forms the crux of the story.

A lot of actors in 'SR Kalyanamandapam' are seen using smartphones. Saikumar even says that he uses Jio sim on one occasion. There is even a reference to 'Baahubali', Sivagami and Kattappa which makes it clear that this film happens in the present but there is a scene where the hero and heroine along with others go to the theatre in order to watch 'Khushi'. As we know, Pawan's classic film came out in 2001 and the first-day first show mania is showcased in the movie which creates a lot of doubts among the viewers. This shows the negligence of the film's team towards the small details. People who walk into theatres after watching the trailer are going to be disappointed as 'SR Kalyanamandapam' doesn't engage you and tests the patience of the audience.

The main emotional point of the film is the father-son thread. Hero's grandfather runs 'SR Kalyanamandapam' wonderfully but it is ruined by hero's father but how the hero makes things right and brings back its lost glory can be narrated in a touching manner. But Saikumar's characterization lacks clarity. He is often shown as the man who is drunk at all times and gets into fights with family members and others. He is shown as a man without any sense of responsibility throughout the movie and the hero stops talking to him. But the hero delivers an emotional speech about his dad at the end and says that his grandfather did not raise him properly which leaves the audience scratching their heads. They did not take such a strong point in the story seriously which will give you an idea of how the rest of the movie would have been.

Kiran Abbavaram's screenplay is the film's biggest letdown. The love track or the emotional thread with his father doesn't have any sort of emotional depth which leaves no room for the audience to get connected with the characters. None of the characters or scenes create an impact but they just pass by instead. The funny writing of the hero's character and dialogues delivered in Kadapa accent drive the film to some extent but there is no consistency in slang too. While it is okay to introduce the hero in slow-motion, showing him in slow-motion on every given chance as if he is a huge star may get on some people's nerves.

There are a lot of routine scenes in this movie starting from the college sequences. The teasing scenes of the hero and the heroine are something which we are witnessing right from the days of 'Idiot'. As said earlier, the father-son track or the Kalyanamandapam track lack emotional depth. While the first half is passable with some funny moments here and there, the second completely falls flat and scenes keep happening with no purpose. There is a lot of lag in the second half and the dialogues too sound repetitive but the occasional songs come as a big relief. There is nothing special in 'SR Kalyanamandapam' and people who don't keep their expectations high are bound to get a bit disappointed by this movie.

Kiran Abbavaram got a lot of confidence after his first film and it can be seen clearly in 'SR Kalyanamandapam'. He is at ease and suited the role of college boy pretty well. His dialogue delivery, action and body language are quite good but there are a lot of elevation scenes to his character which is quite strange since he himself penned the story and screenplay.

Priyanka Jawalkar once again doesn't suit her character. He looks jaded and doesn't have that cuteness. She didn't have much scope to perform except looking glamorous. Saikumar did his best to elevate his poorly written character. We expect a lot from his role after the introduction but it lacks clarity. Srikant Iyengar's acting looks routine and Tulasi as hero's mother is quite apt. The actors who did the role of hero's friends did their part well and Tanikella Bharani made his presence felt within the short screen time.

The major plus point of 'SR Kalyanamandapam' is the music by Chaitan Bharadwaj. His 'Choosale Kallara' and 'Chukkala Chunni' songs attract the crowds and the rest of the songs are decent too. His did an okay job with the background scores too. The budget constraints can be seen onscreen. The visuals are strictly okay and so are the production values.  They would've been side lined if the story and screenplay were good but they turned out to be the biggest drawbacks on this film. There is not a single scene or point that arrests the audience. Sridhar Gadhe's editing work is not good as the slow second half makes the audience get bored. The dialogues are routine and Sridhar disappointed with his direction too as the fresh taking we expect from a new talent is nowhere to be seen.

Verdict: Nothing Attractive In This 'SR Kalyanamandapam'