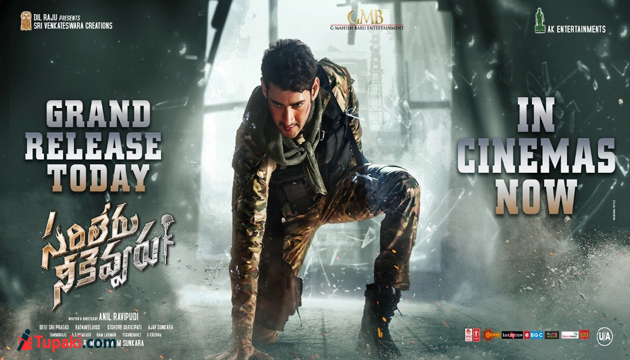 After back-to-back successes like 'Bharat Ane Nenu' and 'Maharshi', superstar Mahesh Babu is back onscreen again with 'Sarileru Neekevvaru'. After a long time, Mahesh Babu attempted a commercial entertainer and with hit director Anil Ravipudi helming this flick, fans are expecting a lot from this film. The film released today and let us just dive right away in the review.

Army Major Ajay Krishna ( Mahesh Babu) is an orphan who loves his country and took part in some serious missions. During a rescue mission, his co-officer Ajay (Satyadev) gets critically injured and Krishna decides to go to Ajay's home to look after the preparations of his sister's marriage. When he lands in Kurnool, he finds out that Ajay's mother Bharati (Vijayashanti) and her family are in danger because of minister Nagendra (Prakash Raj). What is the dispute between Bharati and Nagendra? How did Krishna save Bharati's family? All these questions will be answered on the silver screen.

There is a thing called 'Trend' in Tollywood and it changes for every few years. At a particular time, certain kind of films perform exceptionally at the box-office. But the commercial genre is devoid of the trend as it is eternal. If made correctly, commercial films always sets the cash registers ringing. There are a few directors who have a strong grip on this genre. Previously, it used to directors like VV Vinayak and Sreenu Vytla but now it is Anil Ravipudi. Despite coming up with a routine story, he knows how to entertain people with ample doses of comedy and action. 'Sarileru Neekevvaru' also falls under this category. He showcased Mahesh Babu in a way that his fans always wanted to see him and came up with a complete commercial entertainer. Despite having a formulaic story, narration and lag in some scenes, 'Sarileru Neekevvaru' succeeds in pleasing the fans and mass audience.

From the past few years, directors always showed Mahesh Babu in dignified roles which only required subtle acting. Mahesh too opted for such roles but it is energetic roles in films like 'Pokiri', 'Dhookudu' and 'Khaleja' that pleased his fans. He possesses a unique comedy timing which was underutilized in his recent outings. Anil successfully brought out that energy and comedy timings from Mahesh in 'Sarileru Neekevvaru'. Mahesh looked completely energetic while doing fights and especially dances which are sure to surprise you.

Mahesh Babu gave more than what Anil expected and he is the biggest asset of this film. Anil who did films based mainly on entertainment till date focused more on hero elevations and mass elements this time. In this process, his comedy took a back seat. While most of the comedy worked, some appear a bit forced. Apart from his action sequences, Mahesh took care of the comedy himself at most places. By looking at the trailer, the audience already got an idea about how the film is going to be and the film also follows the same pattern without surprising you.

There are certain sequences like the interval episode, Mahesh and Prakash Raj confrontation scenes and the rescue mission at the beginning gives fans ample goosebumps moments. After initial military scenes, the falls into Anil Ravipudi's comedy zone during the train episode. The film reaches a high point during the pre-interval and interval episodes with Anil setting up a Rajamouli and Boyapati level action block. Mahesh's action and dialogues during this scene are sure to thrill the fans.

The second half too starts on a good note and carries the momentum for 30 minutes but unnecessary scenes start to test the patience of the audience. Mahesh Babu, Vijayshanti and Prakash Raj's scenes and Mind Block song are what saved the second half. If not, 'Sarileruleru Neekevvaru' would have fallen flat. Especially, the climax looked a bit silly. The energy in the first half went missing in the latter half. Despite all its shortcomings, it is Mahesh Babu's energy and high-voltage performance that makes this commercial flick a worth-watch.

Mahesh Babu completely stole the show as Ajay Krishna. His energy and timing will impress everyone and his fans are going to have a blast in the theatres. His mannerisms and imitations show his irreplaceable comedy timing. You will definitely be surprised with his dance moves in 'Mind Block' song and he even carries over-the-top fights with his undeniable aura.

Rashmika got a role of zero substance. Though she acted with a lot of energy, she fails to impress. She looked glamorous in 'Mind Block' song. Vijayashanti does justice to the role she has been given. Her acting prowess can be seen during emotional scenes. Villain characters like these are a sleepwalk for an actor of Prakash Raj's character. Sangeetha is okay while Rao Ramesh, Jayaprakash Reddy, Rajendra Prasad and others played their part.

Devi Sri Prasad's songs look good onscreen. Songs like 'Daang Daang' and 'Mind Block' impress you with their visuals while the title song is the best audio-wise. His background score is good during the action episodes. Ratnavelu's cinematography deserves special applause as the visuals look wonderful. The set work too is commendable. Production values are top-notch from Anil Sunkara and Dil Raju.

Director Anil Ravipudi focused more on Mahesh's stardom and ignored the story. He disappoints you a bit in the comedy department and even faltered in the second half. But he succeeded to bring the best out of Mahesh Babu which is enough to pull off this commercial flick.