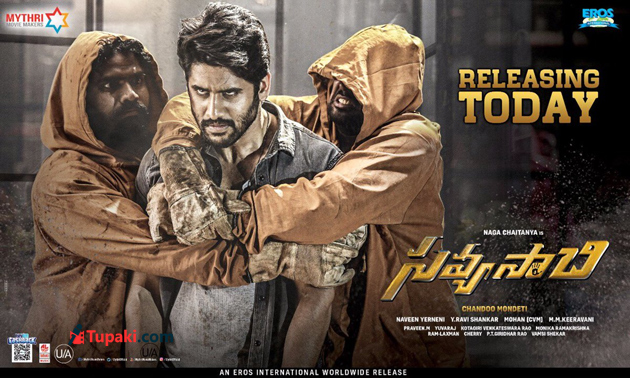 Chandoo Mondeti proved his mettle as a director with 'Karthikeya' and 'Premam'. So, There are good expectations on his next movie. When he took up a concept of Vanishing Twin Syndrome, Not just the Team of Savyasachi but the Movie Lovers too were very excited. This Naga Chaitanya & Nidhhi Agerwal-starrer released Today. Did thriller met the expectations?

Vikram (Naga Chaitanya) was born with Alien Hand Syndrome. Which means, His Left Hand is more like his Twin Brother who have a different mindset. He keeps facing issues because of this rare condition. Vikram falls in love with Chitra (Nidhhi Agerwal) who is his Junior in the college but they both get separated. They meet again after six years and become close again. Just when everything was going smoothly, Vikram's Brother-in-Law gets killed, his Sister gets hospitalized and his Niece gets kidnapped. An anonymous person is behind these disturbing incidents happening in the life of Vikram. Who is that? How did Vikram settle scores with him? What role did his left hand play here?

This is the most unique role Naga Chaitanya has ever done in his career and he did a good job, especially during the intense episodes in the Second Half. Both his look and screen presence have been nice.

Madhavan showed how good an actor he is yet again. Though the role wasn't up to his stature, He did leave an impact using his expertise.

Nidhhi Agerwal looks beautiful and performs decently. There isn't such scope for her to showcase her acting prowess.

Music provided by MM Keeravani is one of the best elements in 'Savyasachi'. Tracks such as Why Not?, Okarante Okaru and Theme Song were composed well. Picturization of the songs is unique. Choreography deserves a special mention. Dance Moves of Chay are surprisingly good. Art Direction is fine. Editing could have been better. Background Score in the Second Half is exceptional. Camera Work by Yuvraj is good. Nothing to find fault with Production Values.

Concept chosen by Chandoo Mondeti is very interesting. He, however, didn't use the Alien Hand Syndrome effectively in the movie. The Young Filmmaker designed few sequences quite well but lack of gripping screenplay makes it an ordinary project.

Alien Hand Syndrome - Left Hand of an Individual acts like a completely different person. This concept looks great on paper & that is why the best in the Industry collaborated for 'Savyasachi'. Problem arises when story based on this rare medical condition isn't that exciting or engaging.

The curiosity which viewers have in the beginning vanishes after a point due to unnecessary deviations. Attempt made to maintain the suspense element till the very end by passing the time with commercial elements proved costly. Viewers felt distracted every time a song or a comedy sequence arrived during the intense episode.

While First Half of 'Savyasachi' have routine love story, passable songs & comedy, Second Half is about the mind game of Hero & Villain. Inclusion of Remix Song and Comedy Skit in the Second Half looks forced. These commercial elements spoiled the whole mood of the audience and flow of the movie. That doesn't mean either the dance number or comedy track aren't good enough. Moving those elements to the First Half could have made a huge difference.

The result of this Naga Chaitanya-starrer could have been different had if it didn't appear alike any other regular revenge drama. Pre-Climax and Climax have been executed well, hence it became a watchable film. Overall, 'Savyasachi' have few good moments but they aren't enough to meet the expectations. You could still give it a try this weekend for the roles of Hero-Villain!