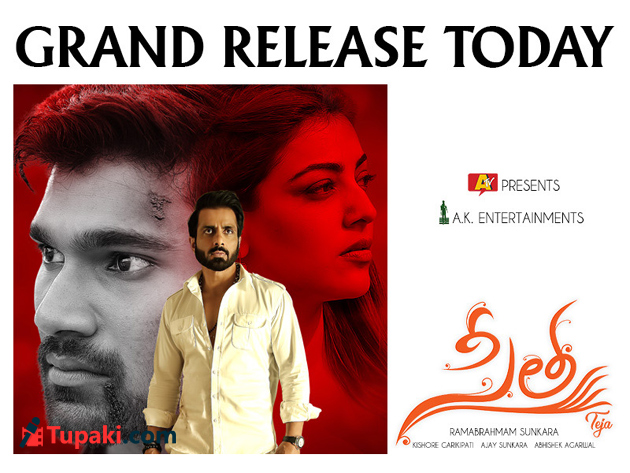 Director Teja delivered back-to-back hits in the beginning of his career but kept delivering only flops after 'Jayam'. The flop streak ended with 'Nene Raju Nene Mantri'. This time, He arrived with 'Sita' starring Kajal and Bellamkonda Sai Sreenivas. Can Teja deliver back-to-back hits again?

Sita (Kajal Agarwal) is money-minded and hardly bothers about feelings of anyone. She enters into an agreement with MLA Basava Raju (Sonu Sood). Sita, however, disobeys the contract but tries to bail out herself from trouble by paying money to the Legislator. Sita comes to know that her Rs 5,000 crore fortune is in the name of her relative Raghuram (Bellamkonda Srinivas) when she tries to sell a property. That is when she decides to cheat Raghuram for overcoming all the problems. Was Sita successful in her attempt?

Kajal Agarwal excels in the role of Sita which has got negative shades. Her Screen Presence, Glamour & Acting Prowess are an asset for the movie.

Bellamkonda Sai Sreenivas failed to do justice to the role of an Innocent Youth. Although attempting such a character is appreciable, The final outcome isn't worth praising. Even Teja failed to make him deliver believable performance.

Sonu Sood does well in the role of antagonist but this role should have been etched out in a better way. Comedian Abhinav Gomatam of 'Ee Nagaraniki Emaindi' fame leave a mark of his own. Tanikella Bharani is okay. Mannara Chopra is fine. Bhagyaraj and Abhimanyu Singh are alright.

None of the Songs topped the charts and that shows the poor form of Anup Rubens. Even Background Score isn't remarkable. Camera Work by Sirsha Ray is good. Production Values are beyond the market range. Director Teja disappoints with 'Sita'. 'Nene Raju Nene Mantri' is a film with powerful characters and strong story. That is why it's so engaging till the very end. When it comes to 'Sita', Teja failed to leave an impact as there is no speciality in the story. He managed to show some variations while designing the three lead characters but weak story and dull screenplay proved costly.

Some Films do well at the Box Office even if they don't have an exceptional story due to interesting characterisations and arresting narration. 'Sita' is based on three peculiar characters (Money-Minded Sita, Innocent Raghu Ram, Ruthless Basava Raju). To make such projects work, Choice of Actors is utmost important more than anything else. Kajal as Sita and Sonu Sood as Basava Raju looked more than perfect. Casting Bellamkonda Sreenivas for an Innocent Character played the spoilsport. Preferring a good performer could have taken this film to the next level. Within few minutes after the screening begins, Viewers get the feeling that Bellomkonda Sreenivas is a complete misfit for the role.

Teja tried to generate humour using Raghu Ram, an innocent youth who grows in an Ashram since childhood coming into the real World all of a sudden. There is good scope for generating comedy but Bellamkonda Sreenivas tests the patience with his expressions and performance as an innocent. The manner in which Raghu Ram Character behaves not only affects the flow but also the intensity.

Of course, Character of Bellamkonda Sreenivas entertains to some extent. The impact could have been more had if a suitable Actor played this role. Kajal Agarwal and Sonu Sood tried their best to save the film with good performances. The conflict point chosen by Teja is weak. Cruel minded Heroine-Villain enters in an Agreement (Heroine has to be in a live-in relationship with Villain if she fails to pay money). Story revolves around this particular agreement and it's ineffective.

Some of the scenes in 'Sita' are unbelievable to say the least. A Hero who doesn't even have the common sense of not to step into bathroom when a lady was taking bath mesmerizes everyone in the court room with his argument upon going through Law Book for 10 minutes. The seriousness required in the narration has gone missing due to silly sequences. Overall, 'Sita' is good in bits and parts. While the First Half is decent, Second Half isn't even satisfactory.