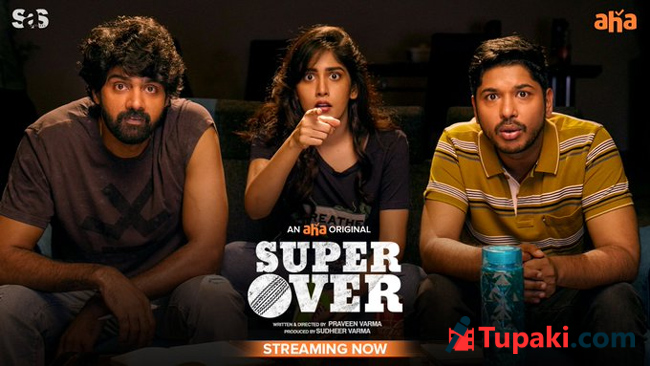 Though the theatres have reopened, the OTT releases haven't stopped. Recently, 'Super Over' featuring Naveen Chandra and Chandini Chowdary as the lead actors has been released on 'Aha' digital platform. It is crime thriller based on betting and it is produced by Sudheer Varma. Let us dive into the review.

Kaasi (Naveen), Vaasu (Rakendu Mouli) and Madhu (Chandini) are friends from childhood who spend most of the time together. Of them, Kaasi gives a lot of money for consultancies in order to go abroad and lands in financial trouble. He may end up losing his house in his town if he fails to pay 40 lakhs within 4 days. With nothing else to do, he enters cricket betting along with his friends and wins a huge sum. What kind of situations they face in order to get their money forms the crux of the film.

'Super Over' is an out-and-out OTT film. The crisp runtime and its narration indicate that it not made for the theatres. The team made an effort to engage the audience through screenplay but never really touches on the background of the main characters. The logics goes for a toss at times and the seriousness required in some scenes goes completely missing. Since it is about people running after money, the film gives us a feeling that it is filled with chasing scenes all the time. But they managed to showcase those changes in an interesting manner within their restrictions. With some twists here and there, 'Super Over' managed to sustain the interest of the audience but fails to leave a lasting impact.

Starting from 'Swamy Ra Ra', most of the films directed by Sudheer Varma revolves around money and crimes surrounding it. Now his protege Prasanth also came up with a similar storyline where cricket betting, money laundering, running from a bad cop and other elements are involved. The planning, scheming and twists are interesting and getting into the story right from the very beginning is its biggest plus point. The cricket betting process is showcased with a lot of detailing and the director's work is very much visible. But the slow-paced narration during the first half an hour tests the patience of the audience.

The film gets engaging from the moment the three friends try to get their winning money. From the moment, the makers made sure that there is one twist or the other popping up every fifteen minutes. The screenplay raises curiosity among the audience but the ending seems to be a bit rushed. While people expect some seriousness while dealing with crores of money, the casual behaviour of some characters looked a bit out of place. The intensity goes missing during these moments. Some scenes needed a bit more tightness and smart writing. Ajay's character looks a bit silly.

On the whole, this OTT film doesn't stay in your mind after completion but manages to keep you hooked throughout its runtime.

Naveen Chandra is a proven performer. Despite the film giving you the vibes of a lengthy short film, he gives his usual best. He brings intensity to some scenes where the writing is weak. Chandini Chowdary is a perfect fit for her role. She acted naturally as an urban girl. Rakendu Mouli too did his part with ease. Despite acting well, Ajay's character was written poorly. Viva Harsha sparkled in a small role. The director could've used his character more effectively. Praveen too did a good job. The rest of the cast are okay.

The entire story takes place in one night. Diwakar Mani made sure that the visuals don't look monotonous and gave a natural look to the film. He did a splendid job during the chase sequences too. His cinematography is one of the backbones of this film. Sunny MR's music helped the narration a lot. His racy BGM's brought a lot of impact. The production values are adequate.

Debutant Praveen Varma seems to have Sudheer Varma's path in terms of story and narration. The twists workout brilliantly at times and the betting business is showcased in a detailed manner. But the lack of logic and intensity during many portions dampen the viewing experience a bit. He scores pass marks on his debut and has the qualities to make better films with more budget and good actors in the future.

Super Over - A time pass crime-thriller!