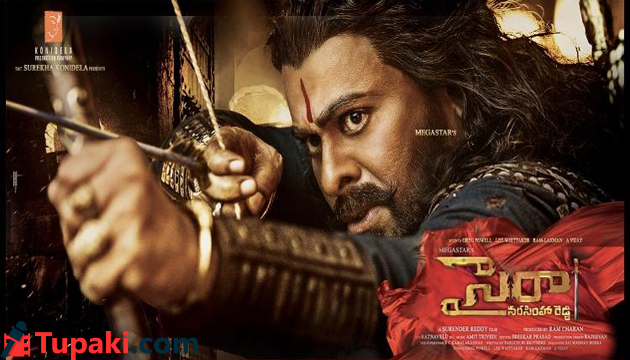 Crew: Based on life story of Uyyalavada Narasimha Reddy

Megastar Chiranjeevi completed 150 films with Khaidi No. 150, but he always wanted to do an epic action drama like Baahubali or Mughal-e-Azam in his career. After Khaidi No. 150 success, he took giant leap in his son, Ram Charan's production and did Sye Raa Narasimha Reddy with 300 crores budget. Surrender Reddy directed this historical fiction, a story written based on Uyyalavada Naarasimha Reddy's valiant fight against British in 1840's for self-respect. Movie release on 2nd October all over the World and let's discuss about the film here.

Uyyalavada Narasimha Reddy (Chiranjeevi) is a Chieftain/Palegadu of Nossam in Rayalseema area, with 60 others, who are ruled by East India Company as a part of Madras Presidency. He unable to see the pressure put on his farmers for taxes decides to wage a rebellion on Jackson, English officer. Entire British army from the area decides nip his rebellion in the bud. Were they successful? If they were, how? Watch the movie to know the answers and other details.

The screenplay of the film doesn't follow the historical facts and evidences much. The director, Surrender Reddy came up with an explanation for this already and called the movie, a fictional story and one has to keep this in mind, before watching the film.

But his overambitious action scenes and exaggerated Over The Top elevations in scenes where Narasimha Reddy fights thousands of British soldiers feel a bit of a stretch. He tried hard to give goosebumps moments to fans but did not care for common audiences who thought they would be watching a biopic based on history. There was never even a remote try to make the film realistic. So, be prepared.

We have to praise the way the screenplay keeps raising the stakes but execution of some scenes feel a bit too rushed for our comfort. Even in climax, after being hanged, hero tries to fight and that seems like a far-fetched attempt at heroism than real mark of grit. There are many such scenes and if you don't want such commercialised retelling of some historic events, this film is not your cup of tea. For others, there are full meals waiting for you if you can sit through some unnecessary episodes.

Megastar Chiranjeevi will find praises from his fans and die-hard followers. But his age is visible on screen and audible in his voice. The movie could have benefitted from his energy and screen presence, 20 years ago. He tried hard and his efforts are commendable but his voice was not suitable for high-pitched dialogue delivery and that aspect hurt his otherwise good performance. In action scenes, it is hard to believe that he pulled every stunt but his ability to play emotions, especially last 20 minutes monologue is commendable.

Nayantara had nothing to do and Tamanna pulled off a better role, convincingly. Jagapathi Babu, Brahmaji, Prithvi are just routine. Rohini and Sai Chand pulled off some important parts very effectively.

Sudeep did really well in a supporting role but Vijay Sethupathi and Amitabh Bachchan seems to have been under-utilised. All others, especially British actors are believable.

Surrender Reddy did not follow the history to the tee but he did give enough stuff to fans of Megastar and common audience to rejoice movie experience on silver screen. Majorly, his work in the climax and in action scenes is commendable. At times, we feel he went overboard with the production values and grandeur but he gave goosebumps with mass scenes without any second thoughts.

Amit Trivedi's music is very good and hummable. He did not kill the soul of the film. Julius Packiam did a great job in following the director's instructions when composing BGM for the film. He outdid himself in the climax episode.

Editing in the movie feels a bit rushed. Action sequences are goosebumps inducing and the Sye Raa team with Lee Whittaker kind of Hollywood technicians at the forefront. Ratnavelu's camera work is outstanding. All other technicians including production design, sound department excelled in their job for this film.