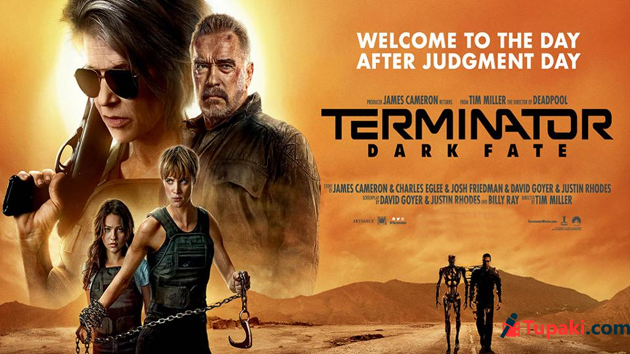 One of the most popular action franchise, 'Terminator' is back again with its sixth installment. Unlike the last three films, 'Terminator: Dark Fate' is a sequel to the second film, 'Terminator 2: Judgement Day'. This film marks the return of Linda Hamilton as the iconic Sarah Connor after 28 years. The film is hitting the screens with heavy expectations and let us see if it reached them or not.

Twenty-two years after Sarah Connor (Linda Hamilton) prevented Judgement Day and saved the human race, a deadly terminator Rev 9 (Gabriel Luna) arrives on earth from the future to kill Dani Ramos (Natalie Reyes), a normal girl from Mexico. At the same time, a powerful and enhanced human, Grace (Mackenzie Davis) lands on earth to save Dani. Under critical circumstances, Grace is joined by Sarah Connor and a powerful T-800 (Arnold Schwarzenegger) to protect Dani from the deadly terminator. Why is Rev 9 after Dani? What is the relation between Grace and Dani? Why does Sarah hate T-800? All these questions will be answered on the big screen.

After giving highly successful and game-changing films in action-adventure genre like 'The Terminator' and 'Terminator 2: Judgement Day', this franchise surely lost its mojo. Though the next three films minted huge money at the Hollywood box-office, the magic and depth present in the first two parts went missing. The filmmakers focused more on grandeur and high-octane action rather than the content in those films.

Though we cannot say that 'Dark Fate' was on par with the first two installments, it is definitely better compared to its previous ones. The writers made sure that there is enough depth in the plot that could lay a solid foundation for the upcoming Terminator films. Though the first 20 minutes doesn't give you the time to settle with adrenaline-pumping action scenes hit you one after the other at a rapid pace, it calms down after that and involves you into the narrative. The characters are established smoothly and the drama is nicely built up that sets the mood for high-octane as well as an emotional last half an hour.

As said earlier, the film stresses the drama part more which may disappoint some people who come expecting 'Marvel' kind of stunts. Also, the usual groundbreaking visual effects that one relates to 'Terminator' series are missing in this film and the fight sequences lacked clarity at times. There are certain parts in the film that may appear too slow and tests your patience. But, they are required for emotional build-up. If you are a fan of 'Terminator' franchise, then this film will not disappoint you.

Arnold Schwarzenegger doesn't have a full-length role and appears only in the latter part of the film. Nonetheless, he is treat to watch him beating the pulp out of villain. He looked perfect with chiselled body even at this age and his straight face suited the role perfectly.

It is great to see Linda Hamilton back onscreen as Sarah Connor and she dominates everyone with her impeccable performance as a badass fighter. This film definitely belongs to Mackenzie Davis as she portrayed the character of Grace with utmost perfection. She showcased emotions beautifully through her intense eyes. Natalia is apt for her role and the rest of the cast were on point.

As discussed earlier, the film does have a strong story and screenplay thanks to its brilliant writers. The way they handled dramatic episodes deserves appreciation. The camera work and the music aided the vision of writers and director. the visuals are outstanding and the film's mood was captured very well. There were a lot of close-up shots in the film which could have been avoided though. The music added a lot of intensity to this film. The editing was on point and smooth transitions from one scene to another is fantastic. Action choreography is fine though they are not breath-taking and the production values are top-notch as expected.

Verdict: Much Better Than Its Predecessors