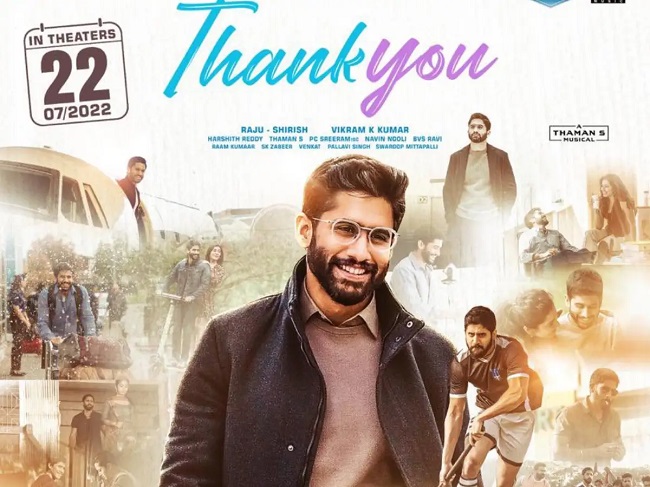 After making a memorable film like 'Manam' with Akkineni family, Vikram Kumar has teamed up with Naga Chaitanya again for 'Thank You'. Produced by Dil Raju, this movie created a good buzz with its promotional content. The makers promoted the film quite well and the film has hit the screens today amidst decent expectations. With Raashi Khanna, Avika Gor and Malavika Nair as the heroines, let us wait and see how 'Thank You' turned out.

Abhiram (Naga Chaitanya) completes his studies and goes to America in search of a job. Apart from that, he develops a medical app and attracts investors. He reaches greater heights in her career but it increases the ego inside him and starts behaving rudely to everyone. He ignores Priya (Raashi Khanna) who was with him from the start. Due to his ignorance, Rao (Prakash Raj) who helped him during Abhi's initial days loses his life. Priya leaves Abhi due to the change in his behaviour. He goes through a process of self-realization and what happens after that forms the rest of the story.

Despite the makers saying that 'Thank You' is not the same as other movies, the promos hinted that it shared similarities to 'Naa Autograph Sweet Memories' and 'Premam'. The storyline which deals with various stages in a person's life and what life lessons he learns from every part of his life has been dealt with many times before. The recent Malayalam film 'Hridayam' belongs to the same category. There is no problem if the same story is told with conviction and emotion can be connected to the audience easily. We see many films with same storylines working out well in the past. Vikram Kumar is known for his unique films. He also has a unique style in making feel good films like 'Ishq', 'Manam', 'Hello' and others. Everyone expected him to create magic when he made 'Thank You' with Naga Chaitanya. While he manages to succeed till for a certain part, the movie starts to get into a stereotypical mode and 'Thank You' falls short of the magic moments that we have seen in Vikram Kumar's movies.

Starting from producer Dil Raju, everyone from 'Thank You' team said that there is a feel in this film. The trailer too made the audience believe in it. But the 'feel' is what went missing in 'Thank You'. There are no surprise elements in this film and we will know right from the beginning about what is going to happen. As said before, the story is about a guy who succeeds in life but has no one beside him due to his ego. How he realizes his mistake and says his 'Thanks' to everyone forms the rest of the story. We get an idea of how the film is going to end right at the start. The ups and downs which the hero faces are quite regular and we don't see Vikram's mark in the first 30 minutes.

But the way he presented the first love story feels very special in 'Thank You'. Though it has nothing unique, the way in which it was filmed and showcased gives us a very good feeling. The realistic scenes impress the audience and it was dealt in a very mature manner. The sequence which led to the first break-up is presented quite convincingly. With PC Sreeram's cinematography and music helping a lot, this phase in the protagonist's life connects with you. Despite a few hiccups, we will be having a good feeling about 'Thank You' by the end of the first half. Just when people get excited to see college life and love, the feel goes out of the equation post the interval. It is quite ordinary barring a few scenes involving 'Pokiri' cutout scene and others.

People might have been more invested in love story but the makers felt that it is something new to showcase a rivalry between two youngsters. It turned out to be a big disappointment. Their constant fights makes you lose your patience. There is a twist to Avika Gor's character which backfired completely. The ending is very ordinary and nothing like the first love story. Vikram Kumar failed in that aspect and the present story's narration wasn't convincing too. The end he had given to the present story is very routine and dramatic. 'Thank You' ends up as a normal film that never reached the heights it was supposed to. It is a very unusual film by Vikram Kumar. He compromised a lot during the writing itself and this surely surprises the audience.

Naga Chaitanya did a similar role in 'Premam'. But he did complete justice to Abhiram's character. He looked convincing in every look and acted accordingly. Acting-wise, it is a very memorable movie in his career. Raashi Khanna looked absolutely beautiful. Despite not having a lot to do, she leaves her mark. Malavika Nair turned out to be a surprise in this film. She looked good and played a memorable role. Avika Gor too did well but her character is not etched properly. Prakash Raj's role doesn't require an actor of his stature. Sampath too did a regular role. Sushanth Reddy got a meaty role but his character irks the audience a lot. The rest of the cast are okay.

'Thank You' got tremendous support from the technical team. We don't need to evaluate the work of a legend like PC Sreeram. His visuals brought life to the proceedings. He created magic on the screen and a few close-up shots were quite arresting. Thaman did a decent job. Considering his recent form, there are no memorable songs but they come according to the situation. The background score is okay too. Production values are great from Dil Raju.

BVS Ravi's story is similar to many films which were made in other languages. We expected Vikram Kumar to showcase his magic with the screenplay but it did not happen. He failed to put his stamp on 'Thank You' and ended up making an ordinary film.