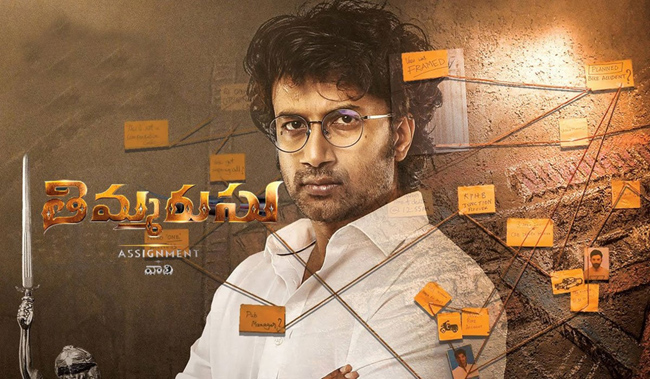 The theatres have finally reopened once again after the lockdown has been lifted. One of the films to arrive this Friday is 'Thimmarusu' which has Satyadev playing the lead role. Directed by Sharn Koppisetty, the thrilling promos have caught the interest of the audience and raised the expectations. Let us see if 'Thimmarusu' met those expectations or not.

Ramachandra (Satyadev) is an enthusiastic and talented lawyer who is looking for a big case to prove his worth. He gets an opportunity to provide law services for common people for free through a company. He takes up the case of Aravind who is serving 8 years jail sentence for a crime he didn't commit. After reopening it, Ramachandra finds some interesting facts and he faces a lot of trouble. How he overcomes the hurdles and brings justice forms the crux of the story.

We have seen a lot of films in Telugu where there is a twist at the interval and another twist during the ending. They call it thrillers but people got so used to them over the years and with the rise of the OTT market, they are able to watch some of the best thriller movies from all over the world. The makers need to be careful these days as they cannot leave the screenplay and only use twists. The makers of 'Thimmarusu' have given us a proper thriller movie. They have taken a Kannada movie story and made sure that the interest stays intact and engages people throughout the runtime. Sharan Koppisetty and his team need to be appreciated for it. The film starts off on a regular note but grabs your attention as the story begins to unfold and take interesting turns. The film will leave you with a satisfaction which is a rare thing these days.

In recent times, we have seen some courtroom dramas like 'Vakeel Saab', 'Naandi' and others where an innocent gets arrested and a lawyer comes to his rescue. Despite the same point, they are different from each other. 'Thimmarusu' is also quite unique despite having the same premise. It may have similarities to 'Naandi' but the team of 'Thimmarusu' has focused more on the thrills right from the beginning to end. It keeps you guessing and makes sure that the tempo doesn't go down. But 'Thimmarusu' doesn't attract you at the beginning. After showing the key crime scene and introducing the hero, some routine scenes bote the audience. Hero worked for a senior lawyer, searching for his own cases, joining another company, comedy scenes with Brahmaji and others give you the feel of an ordinary film for 45 minutes. The movie goes at a slow pace and does have many thrilling moments during this period.

But things start to pick up once the hero gets involved in the case and the twists start to unfold before our eyes, the curiosity builds up and it reaches a peak with the help of a huge interval twist. The second is the biggest strength of 'Thimmarusu' as the proceedings hit the top gear. The solving scenes and finding clues about this murder mystery keep you hooked throughout and it keeps the audience guessing on who the murder is. The audience gets a double thrill during the climax as the hero reveals his connection with the case and exposes the main culprit. The title justification is also given at the end. Despite some boring scenes in the first half and a few loopholes here and there, 'Thimmarusu' engages and thrills the audience. The twists, fast pace, Satyadev's acting, and Brahmaji's comedy are its main assets and people who love such thrillers should walk into the theatres immediately.

Satyadev's talent needs no introduction. He did complete justice to the role of Ramachandra and gave a sincere performance. He looked handsome in the film and it is his best look till date. He elevated a few weak scenes with his acting capabilities and showcased his urge to impress the audience in every frame.

Priyanka Jawalkar is a misfit for this role as she appears too modern. The cuteness in 'Taxiwaala' went completely missing in 'Thimmarusu' and she needs to take more care of her looks. Brahmaji entertains with his subtle and natural comedy. His humor is the relief in a completely serious film. Ankit did well in the role of an innocent guy who gets convicted for a crime he didn't commit. There is nothing to talk about the new villain and other cast members including Jhansi, Harsha, Praveen, Ajay, Chaitanya Rao and others did their bit.

The budget constraints for 'Thimmarusu' were visible onscreen at times but the story and execution made up for that. Sricharan Pakala's music elevated the proceedings and he is a major asset to 'Thimmarusu'. Despite some loud scores here and there, his work is too good. The cinematography complemented the narration very well and the editing is decent too. Sharan Koppisetty did a good job in getting good performances from the cast members and his technical team. Marks should be given for the way he handled the Kannada remake in an engaging manner and how he adapted it for the Telugu viewers. He managed to keep the audience interested till the end which is a tough job.