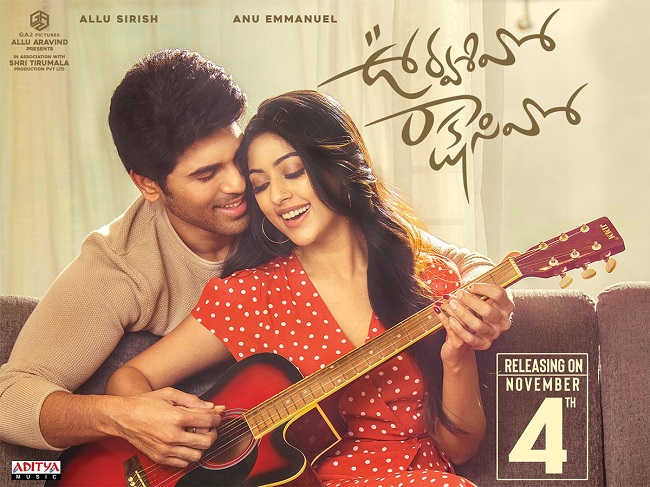 Allu Sirish has been waiting for a good hit since a very long time. Despite coming from a big filmy background, the only success he managed to deliver till now was 'Srirasthu Subhamasthu'. After a brief gap, he arrived with 'Urvasivo Rakshasivo' in which he paired up with Anu Emmanuel. This romantic comedy has generated decent buzz with its trailer and songs. With the hero and heroine's chemistry as the main USP, the movie has hit the screens today. Let us dive into the review straightaway and find out more about this movie.

Sree (Allu Sirish) is a youngster from a middle class family who completes his education and gets a software job. He falls for Sindhu (Anu Emmanuel) instantly and finds out that she is her colleague in the office. As the days go by, they grow closer and make love once. After that, Sree decides to marry Sindhu but she doesn't accept his proposal. Sindhu has some aims and goals in her life which are more important to her. Upon Sree's pressure, she accepts for a live-in relationship before thinking about marriage. How did Sri who came from an orthodox family adjust to live-in relationship? Will Sindhu change for Sree? Where does their journey lead them to? All these will be answered when you watch the film.

Director Maruthi started a trend with 'Ee Rojullo' where he made movies for the youth audience. The double meaning dialogues and adult scenes worked wonders for the director. Due to this, a lot of such movies arrived in Tollywood in order to please the younger set of audience. But the double meaning dose got too high and the cheap quality disappointed the audience which forced the filmmakers to stop making such movies. Due to the arrival of OTT platforms, there is no shortage of bold scenes in online movies or web-series. Thanks to 'Jabardasth', there is no shortage of double meaning jokes on television. Due to this, making youth-oriented movies turned out to be a very challenging task. At this point in time, 'Urvasivo Rakshasivo' turned out to be a successful product that is a mixture of tempting romance and high comedy dose.

'Urvasivo Rakshasivo' is a remake of Tamil movie named 'Pyaar Prema Kadhal'. It is termed as a complete adult movie by the critics. It was considered as a movie which was made on similar lines of 'Bus Stop'. The makers also promoted adult and bold content in the movie to attract the youth. But the makers of the Telugu remake decided to tone down the over-the-top adult content since it is from 'Geetha Arts' banner. Allu Sirish's movie too has a lot of intimate scenes, heavy double-meaning jokes and sizzling love scenes. But there is light-hearted humor attached to it which makes for an entertaining watch. Mainly, there are a lot of scenes that can be enjoyed by the youth in 'Urvasivo Rakshasivo'.

The movie is around two hours and fifteen minutes long and it runs on a fast note for two hours. Right from the word go, the movie is never short of entertainment. Shy hero and daring heroine make for an interesting love story and it is aided brilliantly by high levels of comedy. Seasoned comedians like Vennela Kishore and Sunil made sure that the entertainment levels never come down and even the scenes between the lead pair worked well too. Scenes such as heroine coming onto the hero will definitely excite the youth. There are uncountable lip kisses in this movie and even the simple twists work well too.

The 'Sree Premiere League' episode is definitely the highlight of the movie. Though the double-meaning dialogues are too much in this scene, people who understand them will enjoy it very much. The makers knew who they were catering to and did their best to please them without any inhibitions. However, the last 20 minutes are quite slow and run on a predictable note. Movie takes a sudden shift from being an entertainer to a serious emotional movie. This doesn't sync well but it is necessary for the movie to reach the ending point. Had the pre-climax and climax been strong, 'Urvasivo Rakshasivo' has been a perfect youth-oriented entertainer. This movie is not aimed at a family audience but it definitely reached its target.

Allu Sirish looked natural has a boy next door. He was quite decent in his performance and never went overboard. He chose a role that was apt for him and showcased a lot of ease. We can relate to the innocence in his character and even did okay in the emotional scenes.

Anu Emmanuel is perfect in the role of a modern girl who returned from foreign. Since the actress herself is returned from abroad, she portrayed the role with ease. She displayed brilliant chemistry with Sirish and did a lot of intimate scenes too. This was the most glamorous role she did in her career till date.

Vennela Kishore was fantastic in the role of the hero's friend. He brought the house down whenever he appeared on the screen. Sunil too generated a lot of laughs in the movie. Aamani suited well for the hero's mother role while the rest of the actors were adequate.

The music given by Achu Rajamani and Anup Rubens is nice. There are no chartbusters in the movie but they helped a lot in the proceedings of this movie. They were utilized in storytelling and the background score worked well too. Tanveer Mir's cinematography is neat and the production values are as required.

Director Rakesh Sashii did a fine job with this remake. The original looks like a B-grade movie but he gave it a class touch despite having a youth-oriented narration. The entertainment levels are higher in this movie though there are a good amount of double-meaning jokes. Rakesh showed his prowess as a dialogue writer too though the adult dose could have been toned a bit. Despite a heavy ending, the movie succeeds in catering to the set of audience it was aimed at. On the whole, the director did very good work with 'Urvasivo Rakshasivo'.

Verdict: A Romantic Comedy Aimed At The Youth

Disclaimer : This Review is Just An Opinion of One Person. Please Do Not Judge The Movie Based On This Review And Watch Movie in Theater