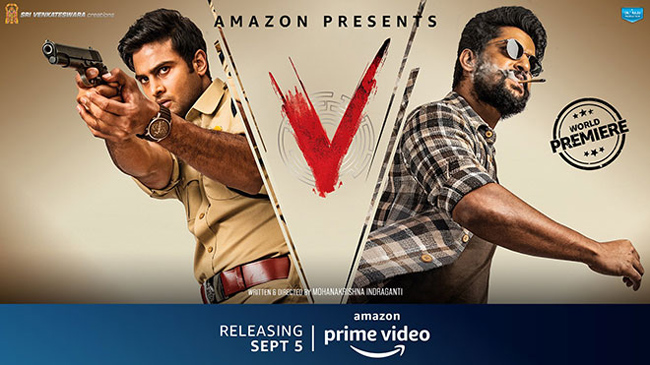 The first big OTT release of Tollywood is finally here. Nani and Sudheer Babu's 'V' is now streaming on Amazon Prime Video. This is the 25th film of Nani and Sudheer Babu will be seen as a police officer. Nivetha Thomas and Aditi Rao Hydari are the female leads in this film directed by Mohana Krishna Indraganti. There is a lot of hype surrounding this Dil Raju's production. Let us dive right into the review now.

A popular police officer DCP Aditya (Sudheer Babu) faces the biggest task in his career when a serial killer (Nani) challenges him openly by leaving clues after every murder. Despite Aditya's best efforts, the serial killer remains untouchable but he gets to know the reason behind all these murders.

The two most important things that a thriller films need are strong narration and slick technical values. 'V' was spot-on in looking slick and stylish. The cinematography , editing, background score, art work and everything was top notch. Despite filming in limited locations, the makers succeeded in bringing a rich look to the film. There are a few instances where you feel like you are watching a Hollywood film terms of technical quality. The dark tones brought a lot of intensity and fast-cut action sequences were well designed. Director Mohana Krishna Indraganti managed to bring the best out of everyone.

The cast did a fine job but Nani will be walking out with all the applause. He portrayed the twisted serial killer role perfectly and it can be guaranteed that he is heart and soul of this film. He lifted the film with his acting calibre in many portions.

The main problem in 'V' lies in its narration. Thrillers need to be gripping and give enough thrills and twists for audience. Sadly, 'V' falls flat in terms of storytelling. There no twists and turns that surprise the viewer and screenplay is too slow at times which tests the patience of the audience. There is no high point in the film which explains a lot about this film. A cat and mouse between two strong characters should be interesting but there isn't a single situation where the police outsmarts the killer till the end. Though the backstory and reason behind these killings were convincing enough, it is way predictable and the director seems to have rushed the ending as the loose ends were tied in a hurried manner. Unlike Indraganti's previous films, heroines have a very less scope to perform. The film doesn't connect with you emotionally at any stage. 'V' is a serious film that doesn't deviate from the story for comic relief or commercial purposes and it should be appreciated.

On the whole, 'V' is a thriller that is high on style but low on substance. Despite Nani's best efforts, the film ends being an average fare.

As said before, Nani comes up with a brilliant performance. He was presented in a menacing way and Natural star pulled it off perfectly. His two different looks suited him well and he looked absolutely fit. He outshined the rest of the cast with his serial psycho killer act. He added a lot of weight with his supreme talent and carried the entire film on his shoulders. His slow dialogue delivery may look at some places.

Sudheer Babu looked stylish and flexed his muscles during the action sequences. He did a decent job in terms of acting but it looked artificial at places. His character was given a lot of hype in the beginning but it couldn't live up to it.

Aditi Rao Hydari impresses everyone within the limited screen time. She looked gorgeous. Nivetha's character wasn't properly etched. She looked okay in the role of girl who falls in love with a police officer. Vennela Kishore is a sidekick to Sudheer Babu and is present throughout the movie but has nothing to do. Senior actors like Rohini, Tanikella Bharani and Naresh were given tiny roles. The rest of the cast were fine.

'V' is a film with top class technical quality. Dil Raju spent a decent amount of money on this flick. A lot of credit should go to cinematographer PG Vinda for giving such fantastic visuals. His work is flawless and the lighting he used to set the mood of the film is applause worthy. A special mention should also go to the colour grading as it was reminiscent to Hollywood quality at times. Background score by Thaman is good and elevated the proceedings though they remind of 'Raatsasan' BGMs occasionally. Amit Trivedi gave decent songs that gels well with the narration despite the fact that none of them are addictive. Editing is slick but the screenplay is dragged at places. The artwork is amazing.

Coming to writer-director Mohana Krishna Indraganti, he stepped out of his comfort zone and made a different film. He is known for his classy light-hearted films but he tried the thriller genre and wasn't completely successful. He brought the best out of everyone barring himself. His narration is too slow and flat for this genre which is known for its gripping storytelling. Also, there is nothing new in the story and the director tried to cover it up with stylish presentation. Indraganti is known for his brilliant writing of scenes and dialogues. But he disappointed the audience in this aspect. On the whole, it is below par effort from the experienced director.