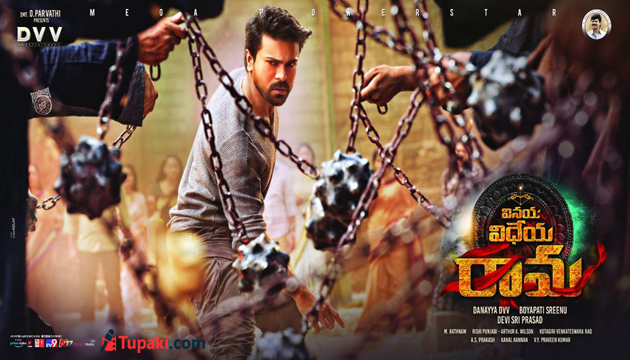 Ram Charan created Non-Baahubali Record with 'Rangasthalam' in Summer 2018. He is back with Vinaya Vidheya Rama' directed by Boyapati Seenu for this year's Pongal. Will it meet the high expectations?

Ram (Ram Charan) is an orphan. Four Other Orphans befriend him & they all grow up like Brothers. For Ram, Brothers are everything and he won't mind going to any extent for them. He keeps finding solution for every problem encountered by his IAS Brother (Prashanth). What has he done for his Elder Brother when a dreaded criminal Raja Bhai (Vivek Oberoi) poses a threat? Rest of the film is all about how Ram saved his Family.

Ram Charan mesmerized with his arresting performance in 'Rangasthalam'. It's disappointing to see him attempt a film like 'Vinaya Vidheya Rama' after a classic. This is a wrong step Charan shouldn't have made particularly when he is gaining acceptance from all sections of people. Though he did well in Action Sequences & Fights, There is nothing to boast about his Performance.

Kiara Advani is so beautiful but she is restricted to few portions in the first half and Songs. Vivek Oberoi has followed the instructions of Director blindly. His Character isn't exciting at all. Prashanth and Sneha have scope for performances but they couldn't leave a big impact. None of the other Actors left a lasting impression.

Music composed by Devi Sri Prasad is one of the weakest element in 'Vinaya Vidheya Rama'. Not even a single song was either refreshing or good enough to hum. No speciality what-so-ever in the Background Score as well. Cinematography by Rishi Punjabi and Arthur Wilson is ordinary. DVV Danayya maintained lavish Production Values. Seems like, Boyapati Seenu directed 'Vinaya Vidheya Rama' with so much over-confidence. Neither Story nor Screenplay have any freshness. He is known for action blocks with strong emotions. In #VVR, The emotional quotient went missing in the action sequences.

Telugu Film Industry changed a lot in the past few years. Even Star Heroes have been looking forward to try different subjects irrespective of their image. Films such as 'Dhruva' and 'Rangasthalam' were a best example. Just when people began appreciating his choice of scripts, Ram Charan okayed a commercial potboiler directed by Boyapati Seenu and the end result is 'Vinaya Vidheya Rama'. Until now, Boyapati was able to taste success despite overdose of action elements because audience could relate to the characters in his films and connect with emotions. In #VVR, That emotional connect has gone missing completely.

Boyapati follows the same template for all of his movies by just changing backdrops - Protagonist who goes to any extent for justice & Antagonist who controls a region with his power. How the Hero wins over Villain forms rest of the tale! Boyapati didn't try anything different for 'Vinaya Vidheya Rama' but failed to ensure audience connect with it emotionally. The focus is only on fights, punch dialogues and hero elevation.

Movie Buffs wondered why 'Vinaya Vidheya Rama' title has been preferred for this movie. Majority of the people felt 'Vidwamsam' could have been an apt title. Why because, Half of the screen time was catered for fights done by Ram Charan. Majority of the scenes in 'VVR' have been watched by Telugu Audience plenty of times in super hit films. Searching for logic in a Boyapati flick is a crime. In between the action sequences, Family Sentiment, Comedy Blocks and Love Track has been included. Even the Masses mayn't appreciate such a cliched subject.

'Vinaya Vidheya Rama' is a classic example of what happens if a filmmaker doesn't know where to draw the line. Audience are in no mood to accept everything that's been shown on the screen. Boyapati failed completely as a Director. This is the weakest film in his career & there is no doubt about it.