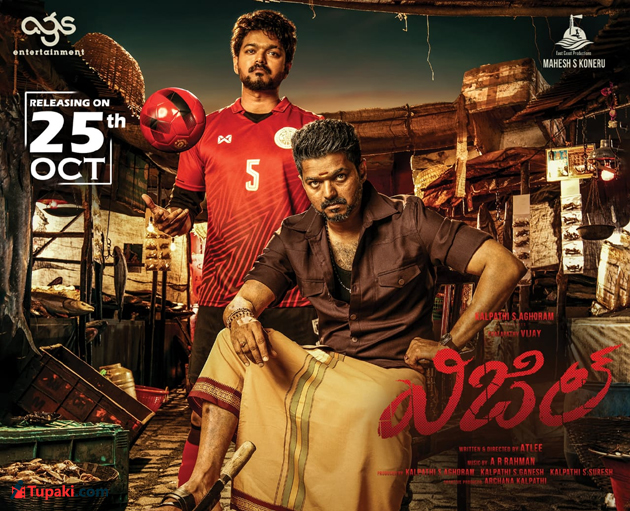 Tamil star hero Vijay who is on a roll with back-to-back blockbusters like 'Mersal' and 'Sarkar' has arrived onscreen this time with 'Whistle'. There are lot of expectations among everyone on this film directed by Atlee. Starring Nayanthara as the female lead, this film is a mass commercial film that touches some serious issues like women empowerment, corruption in sports and others. Let us jump into the detailed review.

Rayappa (Vijay) is a local goon who fights for the justice of people in his area. He doesn't want his son Micheal (Vijay) to follow his footsteps and encourages him to be a footballer. But situations lead to Micheal taking up his father's place.

After few years, circumstances force him to enter the football court he left again but this time as a coach to women's football team. How does Micheal manage to drive his team to victory and handle his enemies at the same time forms the crux of the story.

Atlee who is known for delivering mass entertainers that satisfy everyone has done it once again. He used the demi god image of Vijay to maximum potential and has given ample goosebumps moments for his fans to cherish. Whenever there is a dull moment in the film, he followed it up with an elevation scene to bring back the film on track. This film is a grand homage to Vijay's unmatchable craze.

Despite catering to Vijay's fans, the film was able to showcase the emotions pretty convincing manner. The sub-plots involving two players in the team were handled very well. Atlee proves his caliber once again in dealing emotional and dramatic sequences as they are the one that connects with you amid all the massy moments.

On the flipside, the film takes its own sweet time to unfold as the first half appears to be dragging at times. The logic goes for a toss much like every star hero film. Though people have got used to it, scenes like stopping the CM's convoy and blasting a police vehicle in front of the station itself and walking out in slow-motion at the end of it looks way over the top. The biggest drawback of the film is the lack of strong antagonist as there is no one to challenge the hero. Though there are ample fight scenes, the reason behind them appears silly at times. Also, Atlee has gone overboard in projecting Vijay as his fans wanted and Telugu people may find it a bit unconvincing. The football episodes should have been handled with more authenticity. The climax portions remind you of 'Chak De India' despite the drama working out.

If you have no problem dealing with some Tamil nativity and lag here and there, 'Whistle' will definitely entertain you.

This is completely a Vijay film and he carries the entire film on his shoulders with ease. He is at his usual best while delivering mass dialogues and bashing the rowdies with a swag of his own. He shows his acting prowess in elder role and in sentimental scenes. His histrionics have been over dramatic at times.

Nayanthara looks great and performs well in a brief but impactful role. Her chemistry with Vijay looked good onscreen. Jackie Shroff was wasted on a role of zero substance. The female actresses who acted as football players looked apt for their respective roles. The rest of the cast included a lot of Tamil actors and they were okay.

The film is rich on the technical front. GK Vishnu deserves special appreciation for his tremendous work with his lens. He showcased the film in magnificent lighting and visuals looked great onscreen. Production design is great as the local area sets the few others were crafted with a lot of artistry. Dubbing work is decent though few Tamil names and boards weren't replaced. Music by AR Rahman is pretty average and none of the songs gets registered but his background score elevated many scenes and makes you invested. Editing by Ruben leaves a lot to be desired as the film moves at slow pace and some scenes could have been chopped off in the first half. Producer spent a lot on this film and it is quite visible.

Coming to director Atlee, he played it safe by catering to Vijay's fans. He presented him very well and also handled the emotional threads convincingly. He definitely knows how to make a star hero film with decent content. But, he sometimes left the story behind and focused on his hero. Also, the screenplay is quite slow and certain scenes were dragged unnecessarily. Had he taken care of it the film would have been a nearly perfect commercial entertainer.

Bottom Line: A Good Concept Dominated By A Star Hero!