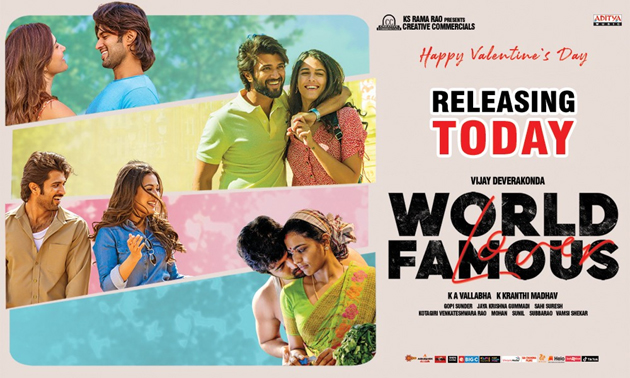 Rowdy hero Vijay Devarakonda's 'World Famous Lover' is releasing today amidst huge expectations. Touted to be Vijay's last love story, this film got a good buzz around it. Directed by Kranti Madhav, this film has gorgeous ladies Raashi Khanna, Aishwarya Rajesh, Catherine Tresa and Izabelle Leite in the lead roles. The trailer suggests an intense love story this Valentine's Day and let us jump into the review to find out if the makers kept their promise or not.

Gautham (Vijay Devarakonda) who is in a live-in relationship with Yamini (Raashi Khanna) aspires to become a writer and leaves his job. Yamini takes care of everything while Gautham gets disconnected with her and lives in his own world. His writers block makes him lazy and lethargic.

Fed up by his attitude, Yamini breaks up with Gautham and that triggers him to start writing again. From then, the film starts shuttling between fiction and reality. What happens to Gautham? Will he work things out with Yamini at last? How his novel helps him realize his reality? The answers to all these questions forms the rest of the story.

The idea of protagonist finding the truth about reality because of his fictional book may sound brilliant on the paper. But the mettle of the director lies in ably converting it on screen and Kranti Madhav falters badly in this aspect. He failed to establish how the hero realizes his mistakes clearly which made the film loose its soul right from the very beginning. The back and forth narration may look trendy but it may lead to a lot of confusion if not handled properly.

The director gets it right in the first half but somewhere lost track in the latter half. This doesn't mean the film is entirely bad.

The film definitely has its moments. The track of Seenayya and Suvarna was written and executed beautifully. Both Vijay and Aishwarya excelled in their roles and the authenticity in these portions is definitely one of the biggest assets of this movie. The emotional scenes came out pretty well in the first half and Vijay as a union leader looked quite impressive. His dialect and mannerisms provided the much-needed fun moments. Also, the complications in Gautham and Yamini's love story were well established. The first half manages to engage you and give a positive feel about the film.

The problem starts as soon as the second half begins. The narration bogged down completely during the Paris love track and that is where the film goes out of track and starts. When the scene shifts to reality, the film falls into a melodramatic category and starts to test the patience of the audience. Despite Vijay's intense acting, the film never connects with you during these parts. After all the weeping and emotional sequences, the climax portions doesn't convince you. Raashi Khanna's character is written poorly. The hero tries to convince her all through the second half and she pushes her away. As soon she knows that he is in jail, she stops her own marriage and locks herself down in the house for two years. This explains a lot about how things went in the second half.

On the whole, the decent first half was entirely ruined by the snail paced and boring second half leaving a lot to desire from 'World Famous Lover'.

Vijay Devarakonda showcased the variations brilliantly. His acting in emotional scenes are so good and his action as Seenayya deserves a special applause. His acting prowess was utilized in this film. If not for him, the film would have been an endless bore fest. He also appears good in the film and pulls of different looks confidently.

Raashi Khanna looked absolutely gorgeous and did a fine job though her acting in emotional episodes may not look convincing at times. Despite the short length of her character, Aishwarya Rajesh manages to impress the audience. She scored brownie points with her portrayal of Suvarna. Catherine looked glamourous and her role doesn't demand a lot from her. Izabelle too did an okay job. Actors like Priyadarshi, Sethru and Jaya Prakash were apt for their roles.

The film looked good onscreen thanks to the colorful cinematography. The visuals looked vibrant and perfectly backed the writing. The production values were top-notch. Music by Gopi Sundar is surprisingly disappointing this time. Usually known for his melodious tunes, none of Gopi Sundar's tunes register in your minds. His background score is better than the songs but has not extraordinary in it. Films of this genre need good music and Gopi's work is a huge letdown. The film needs some trimming in the second half as it appears to be dragged a lot. Also, the editing is a bit rough during the transition between reality and fiction at times.

Director Kranti Madhav did a below par job with 'World Famous Lover'. It is his lazy writing and snail-paced narration that brought down the film despite some good performances from the lead cast. He dragged the film unnecessarily towards the end which irked the audience. His brilliance was clearly visible in Seenayya and Suvarna track. Had he maintained the same tempo throughout the film, the result would have been a whole lot better.