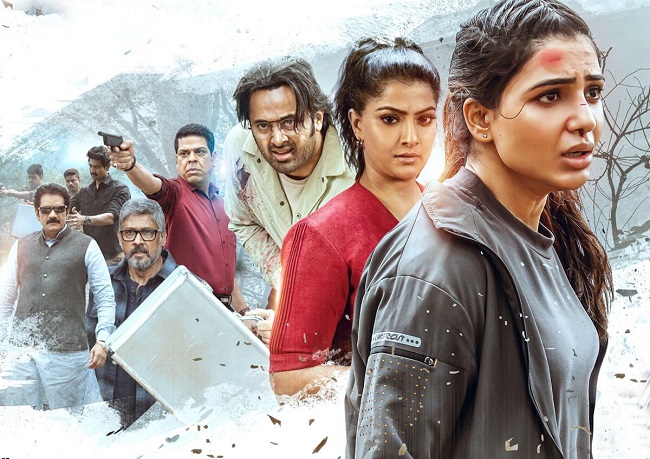 Samantha is one of the very few heroines in Tollywood who can manage to bring people into the theatres just by herself. After impressing the audience with movies like 'U Turn' and 'Oh! Baby', she has arrived with another female-oriented film titled 'Yashoda'. Directed by Tamilian director duo Hari and Harish, this movie is a complete thriller and generated good buzz with this promotional content. Let's dive into the review and find out how the movie is.

Yashoda (Samantha) is a middle class girl who accepts to become pregnant through surrogacy as she is in need of money. He signs an agreement with a big company and goes to a mysterious building in order to stay there right from getting pregnant to delivering a child. She experiences some unique situations there and realizes that there is something wrong going on. Women who are ready to deliver the babies go missing one after the other. Yashoda realizes that there is a big mystery behind this. What is it? What does Yashoda do to put an end to it? The answers to these questions form the rest of the story.

Do you remember Ravi Babu's 'Amaravathi' starring Tarak Ratna as the villain and Bhumika in a key role? Just like Ravi Babu's 'Anasuya', 'Amaravathi' is also an interesting thriller that is made on a different concept. While it was good, the concept of the villain attacking the pregnant women did not go down well with audience. Despite the directorial brilliance, the hard-hitting scenes which revolved around pregnant women were hard to accept at that time. The plot point is the main reason for the failure of 'Amaravathi' despite being a good thriller. Reminding this movie, Tamil directors Hari and Harish came up with 'Yashoda'. There are no big comparisons between both the movies but they revolve around pregnant women. The plotline is quite different in 'Yashoda' too and it stuns you many times. Even in this movie, the hard-hitting narration around such a sensitive subject proved to be a bit difficult. Despite succeeding in keeping the viewers guessing, the 'Yashoda' team failed to convince the audience. With pluses and minuses being in the same level, it hard to call 'Yashoda' successful but it is definitely not a failure.

Right from the teaser, it has been made clear that 'Yashoda' is a film made on a different concept and has strong content. Hari and Harish who made content-oriented films in Tamil till date, did the same in Telugu too. They should be appreciated for choosing this point and doing a lot of hard work during the scripting stage. But there did not entirely succeed in narrating it in a convincing manner. We are often seeing celebrities becoming parents through surrogacy nowadays. With Nayanthara and Vignesh Shivan becoming parents in the same way recently and a lot of controversy happening around it, the concept of 'Yashoda' looks contemporary. People expected the makers to showcase the corruption around surrogacy in this film but they took a separate direction. This proved to be the biggest plus and minus of the film. Delivering what is not expected is a strength while being unrealistic is its weakness.

The main point of a thriller is to make the audience excited and engaged. 'Yashoda' partly succeeded in this aspect. All the women carrying surrogate babies coming to one place and getting disappeared one after the other and the lead actress trying to solve this mystery make the proceedings engaging. Though the comedy and romantic portions did not work out, people become curious to find out what was happening in the building. There are a few loose ends on the way to solving this mystery but they can be excused. The first half runs at a decent pace.

The main twist gets revealed immediately after the second half starts. Though the shock factor worked quite well, it looks a bit unnatural which gives a mixed feeling to the viewer. After that, there are not many scenes that managed to hold the interest of the audience. Had the twist been revealed during the pre-climax, the situation would have been entirely different. The lag after the flashback episodes worked against the movie. The twist linked to the heroine's character is not exciting at all as we have seen such twists a lot of times. The graphs falls further down during the pre-climax and climax portions. But the movie doesn't bore you entirely. People who are interested in watching thrillers with different concepts can have a look at 'Yashoda' that too by keeping their expectations in check.

Not all actresses can pull off the Yashoda role. We realize that only a few big stars like Anushka and Samantha can pull off this character. Samantha carried the entire film on her shoulders. She showed the various shades perfectly throughout the film. During the action sequences, we get a feeling that only Samantha can do them and her image of being a fitness freak worked in her favour. Sam performed convincingly in the emotional scenes too.

Unni Mukundan played the role with two variations quite well. Varalaxmi Sarathkumar is impressive in the negative role. Rao Ramesh showed his worth in the brief role. His character reminds people of the role he did in 'Pakka Commercial'. Actors like Sampath, Shatru, Kalpika Ganesh, Divya Sripada and others were apt for their roles and did complete justice.

Mani Sharma's background score is a big asset to 'Yashoda'. His work played a crucial in bringing intensity to the proceedings. He showcased his experience during engaging sequences and definitely enhanced the viewing experience. The bit songs in the movie are not that impactful. Sukumar's cinematography is very good. Production design is okay and the makers spent handsomely on the movie. The art work is a bit artificial at times. Pulagam Chinna Naraya and Challa Bhagyalakshmi's dialogues are sharp. They are not over the top and were apt for the mood of the movie.

Director duo Hari and Harish selected a very unique point and try to narrate in on an interesting note. Despite all their efforts, they failed to present the plot point in a convincing manner. 'Yashoda' had the potential to become a gripping thriller but it did not shape out convincingly as the makers decided.