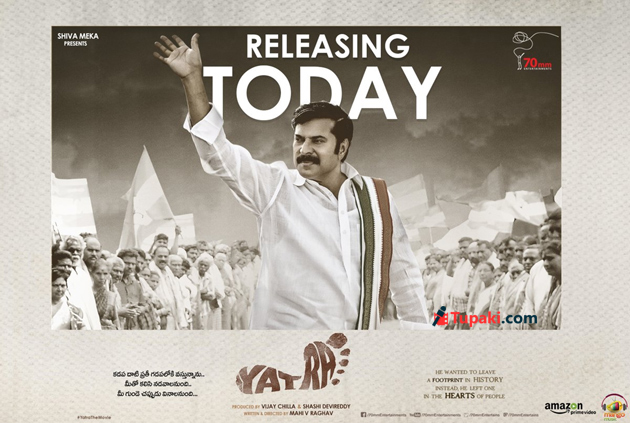 YS Rajasekhar Reddy earned a place in the hearts of Telugu People with his welfare schemes. Historic Padayatra before the 2014 Polls was a life-changing experience for YSR. 'Yatra' is based on this crucial phase and how it transformed him into a people's leader.

Story begins with the depiction of the ground reality in United AP before 2004 Elections. Then CM Chandrababu Naidu opts for Early Polls to encash on the sympathy wave post Alipiri Blast. Congress doesn't have much hopes on getting hold of power. In such a situation, YS Rajasekhar Reddy launches Padayatra to known about people's issues and what public have been expecting from the rulers. Rest of the story is about the life-changing experience during the Padayatra and how YSR emerged as People's Leader with implementation of many welfare schemes upon becoming CM.

Mammootty is the centre of attraction in 'Yatra'. People can't imagine any other Actor as YSR after watching the biopic. Such is the perfection achieved by the Malayalam Superstar while essaying the iconic role. He is flawless, be it his look or body language, dialogue delivery and expressions. The intensity with which he performed in the emotional scenes is praise-worthy. Especially, Dubbing brought the required depth needed to make the people connect emotionally with the character. Don't be surprised if Telugu People start remembering Mammootty as YSR from now onwards.

Ashritha Vemuganti who played the role of YS Vijayamma breathed life into the skin of the character. Rao Ramesh as KVP Ramachandra Rao is too good. Suhasini as Sabitha Indra Reddy does a fine job. Sachin Khedekar, Posani, Prithvi, Anasuya and others have done justice to their roles.

All the Technicians worked in tandem for 'Yatra'. Songs and Background Score by K are in perfect sync with the theme of the movie. Cinematography by Satyan Suryan is nice. Production Values are pretty good. Director Mahi V Radhav deserves all the praises coming his way for narrating the biopic of YSR with so much conviction. 'Yatra' wouldn't have been the same if not for sincere efforts of this Young Filmmaker. He ticked all the right boxes to make 'Yatra' a memorable experience for Telugus. Particularly, The manner in which he dealt the emotional sequences is impressive. Being aware of the limitations, He ensured the film is so engaging by maintaining high emotional quotient.

First things first, 'Yatra' isn't a biopic of YS Rajasekhar Reddy. It's an emotional journey of a Leader who launched Padayatra to understand how he could make to improve the standards of poor and middle class people. The magnanimity of YSR has been presented in a very convincing manner here. Mahi V Raghav succeeded in making Telugu People connect with 'Yatra' emotionally...That itself is an indication of success!

Mammootty breathed life into the character of YSR...He is simply superb. All the Supporting Cast have done what was required from them. Mahi V Radhav took up the challenge to make a film based on padayatra inspite of knowing about the limitations. He came out with flying colors by extracting the best from the Actors and Technicians apart from maintaining the emotional thread.

YSR emerging as the People's Leader with Padayatra is the core concept of 'Yatra'. Initial scenes depicting YSR's character are pleasing to watch. The way emotional back-stories were shown for Welfare Schemes implemented by YSR is really appreciable.

On the flip side, 'Yatra' shifts into documentary mode after the launch of Padayatra. There could have been possibility for more drama had if entire life story of YSR was covered. Here, Makers focussed only on the historic padayatra and what change it brought in YSR. Lack of antagonist is another drawback for 'Yatra'. Using 'Briefed Me' reminds people of the cash-for-vote scandal involved by the TDP Leadership. Though there are few satires on TDP, Congress has been projected as Villain more than that of the Ruling Party in this flick.

All those who admire YSR will thoroughly enjoy watching 'Yatra'. The last few minutes depicting the sudden demise of YSR in a chopper crash leaves YSR Fans teary-eyed. Even Neutral Audience and people who are loyal to other parties could give it a try for sure. The appearance of YS Jagan towards the end doesn't raise the question 'Why YCP Chief's role wasn't included in the movie?'. Overall, 'Yatra' is a movie which touches the hearts of Telugu People.